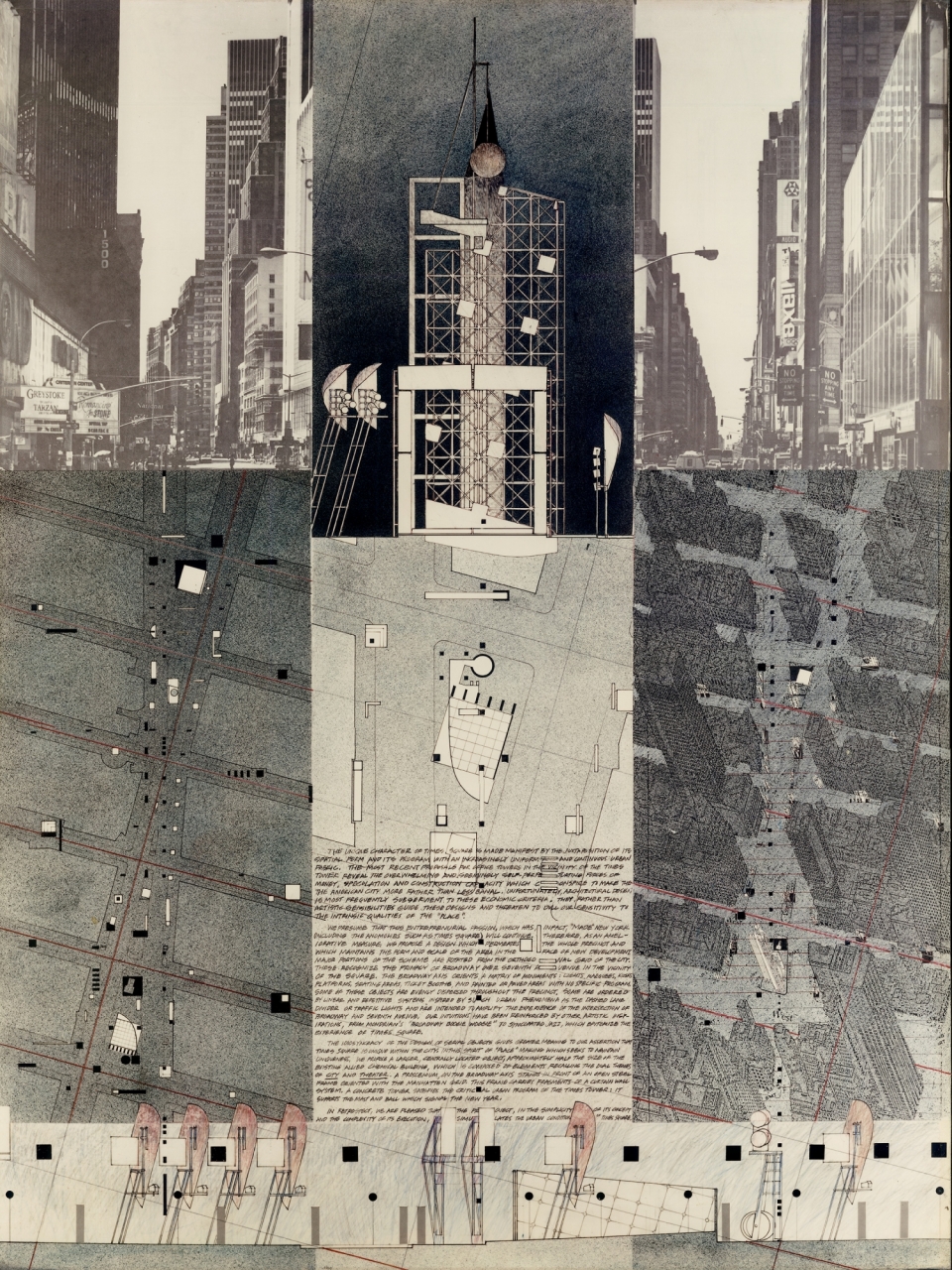 The unique character of Times Square is made manifest by the juxtaposition of its spatial form and its program with an increasingly uniform and continuous urban fabric.  The most recent proposals for office towers in the vicinity of the Times Tower reveal the overwhelming and seemingly self-perpetuating forces of money, speculation and construction capacity which conspire to make the American City more rather than less banal.  Unfortunately, architectural design is most frequently subservient to these economic criteria.  They, rather than artistic sensibilities guide these design and threaten to dull our sensitivity to the intrinsic qualities of the "place".

We presume that this entrepreneurial passion, which has, in fact, "made" New York (including the anomalies such as Times Square) will continue.   Therefore, as an ameliorative measure, we propose a design which permeates the whole precinct and which maintains the form and scale of the area in the face of new development.  Major portions of the scheme are rotated from the orthogonal grid of the city.  These recognize the primacy of Broadway over Seventh Avenue in the vicinity of the Square.  The Broadway axis orients a matrix of monuments, lights, marquees.

Kiosks, platforms, seating areas, ticket booths and painted or paved area with no specific program.  Some of these objects are evenly dispersed throughout the precinct.  Some are ordered by linear and repetitive systems inspired by such urban phenomena as the dashed lane divider or traffic lights and are intended to amplify the experience of the intersection of Broadway and Seventh Avenue. Our intuitions have been reinforced by other artistic inspirations, from Mondrian's "Broadway Boogie Woogie" to Syncopated Jazz, which epitomize the experience of Times Square.

The idiosyncrasy of the design of serial objects gives greater meaning to our assertion that Times Square is unique within the city.  In this spirit of "place" making which seeks to maintain uniqueness, we propose a larger, centrally located object, approximately half the size of the existing allied chemical building, which is composed of elements recalling the dual themes of city and theater.  A proscenium, on the Broadway axis in front of an open steel frame oriented with the Manhattan grid.  This frame carries fragments of a curtain wall system.  A concrete tower satisfies the critical urban program of the Times Tower: It supports the mast and ball which signal the New Year.

One of eight first place entries from a pool of 565 submissions.