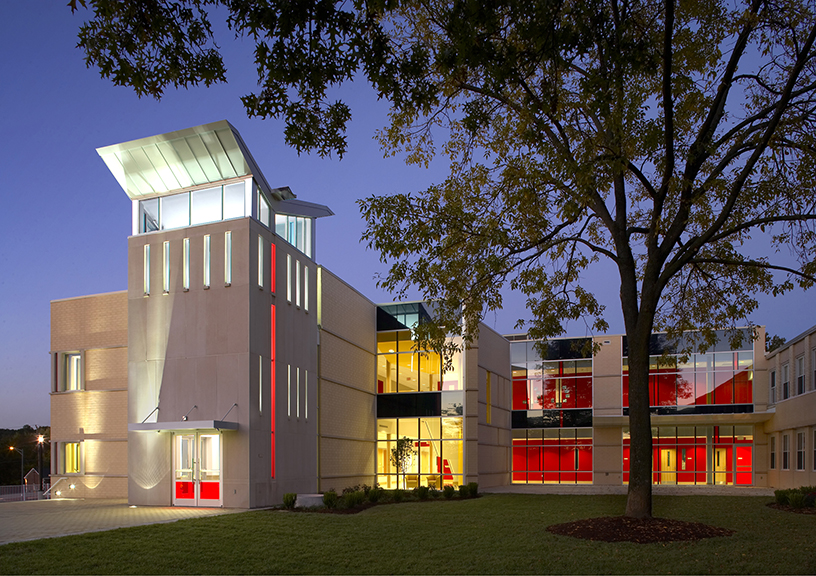 COR JESU ACADEMY, ST LOUIS, MO - Cor Jesu Academy is a private college-preparatory high school for girls located on rolling hills in the St. Louis suburbs.  The administrative and classroom building is an addition to an existing 1957 high school campus which occupies 13 acres.  The new building was to create a new face to the community atop a hill which faces a prominent street. The existing building incorporated one courtyard and the new concept was to add a second larger and accessible courtyard or “outdoor” room between the existing buildings and the new addition.  A symbolic tower was added to create a visible entryway into the complex. Earlier there were several entries which were all equal and difficult for a newcomer to discern. The tower’s form and articulation is based on the crest of the order of the Catholic Sisters who teach at the school whose main symbol is the heart of Jesus with a slit through it.The school color is red which is generously displayed on walls and in the glass of the new building. The 16,000 sq. ft. building is comprised of five state of the art classrooms, a large board room, main office, and administration offices.  The layout of the building is an L shape with a mostly single loaded corridor so that the “outdoor” room or courtyard can be viewed from the interior. Views to the tower are evident from the open hallway plan and help a student orient themselves though out the building. The new building is connected to the old with a large curving red wall called the “Spirit” wall.  The color of this wall can be seen from the exterior courtyard of the building. The classrooms face north so they have ample light, but no direct sun.  The trees that they view are sunlit. The monumental stair connecting the two floors is adjacent to a window wall with niches for sculpture. The building is clad in brick and limestone that matches the materials of the original school building.  The interior has a terrazzo floor with mother of pearl fragments which is the material of the senior class rings. Other renovations were done though out the campus including a new parking lot with a student drop off and “history” path, a rally amphitheater and path to the sports fields, science lab, and weight room.