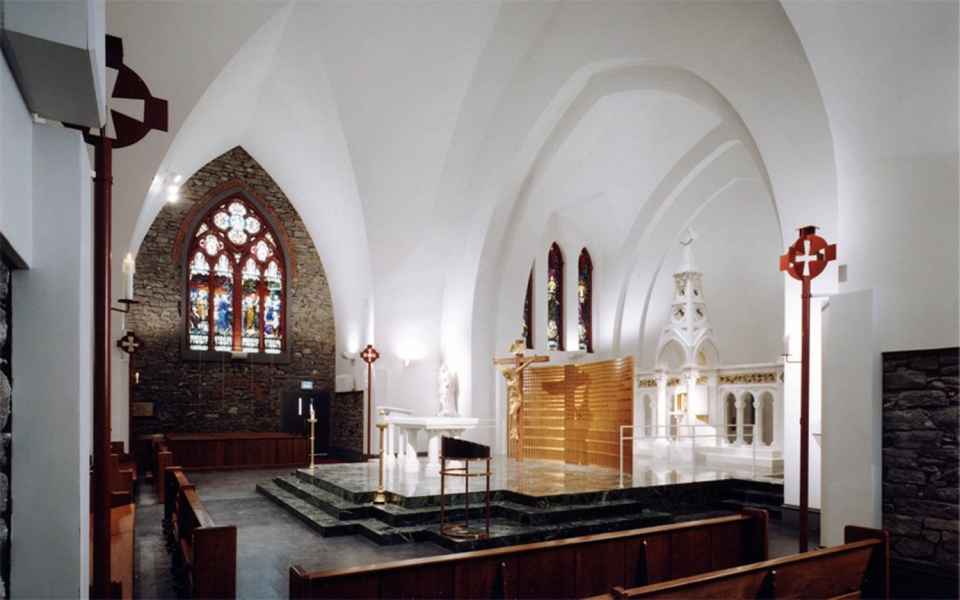 SAINT PATRICK’S CHURCH, GLEN COVE, NY - St. Patrick’s Church is a 100 year old structure located prominently on a hill outside of the City of Glen Cove, New York.  Designed by the Portuguese-American and Ecole des Beaux Arts trained architect Thomas Almiral (designer of the New York City Landmark Seaview Hospital on Staten Island), the building is both a civic and historical landmark.  Bentel & Bentel was engaged to prepare an analysis of the existing building including a review of historic finishes and the historic configurationally the interior.  Following the report, Bentel & Bentel was engaged to carry out rehabilitation work as well as the addition of a new interior that responded to the changes brought about by Vatican II.

Given the liturgical and technical requirements --and very limited budget-- our strategy was to relocate, reuse, and remove.  The altar was brought 20 feet forward into the pews to encourage a more communal celebration.  Four steel dedication crosses at the corners of the crossing of the nave transept underscore the importance of the new altar position.  A gracefully curving screen, made of brass tubes, separates the altar from the reredos, the original marble altar screen that now contains the tabernacle.  Under the new lighting system, the brass screen functions much like a theatrical scrim.  The new space behind the screen now forms a new eucharistic chapel.

We painted the vaulted ceilings white and removed 10 foot high sections of plaster from the lower walls to reveal the rough-hewn granite blocks beneath.  The stone, now visible, contrast with the gleaming vaults above and makes the stained glass windows more vibrant.