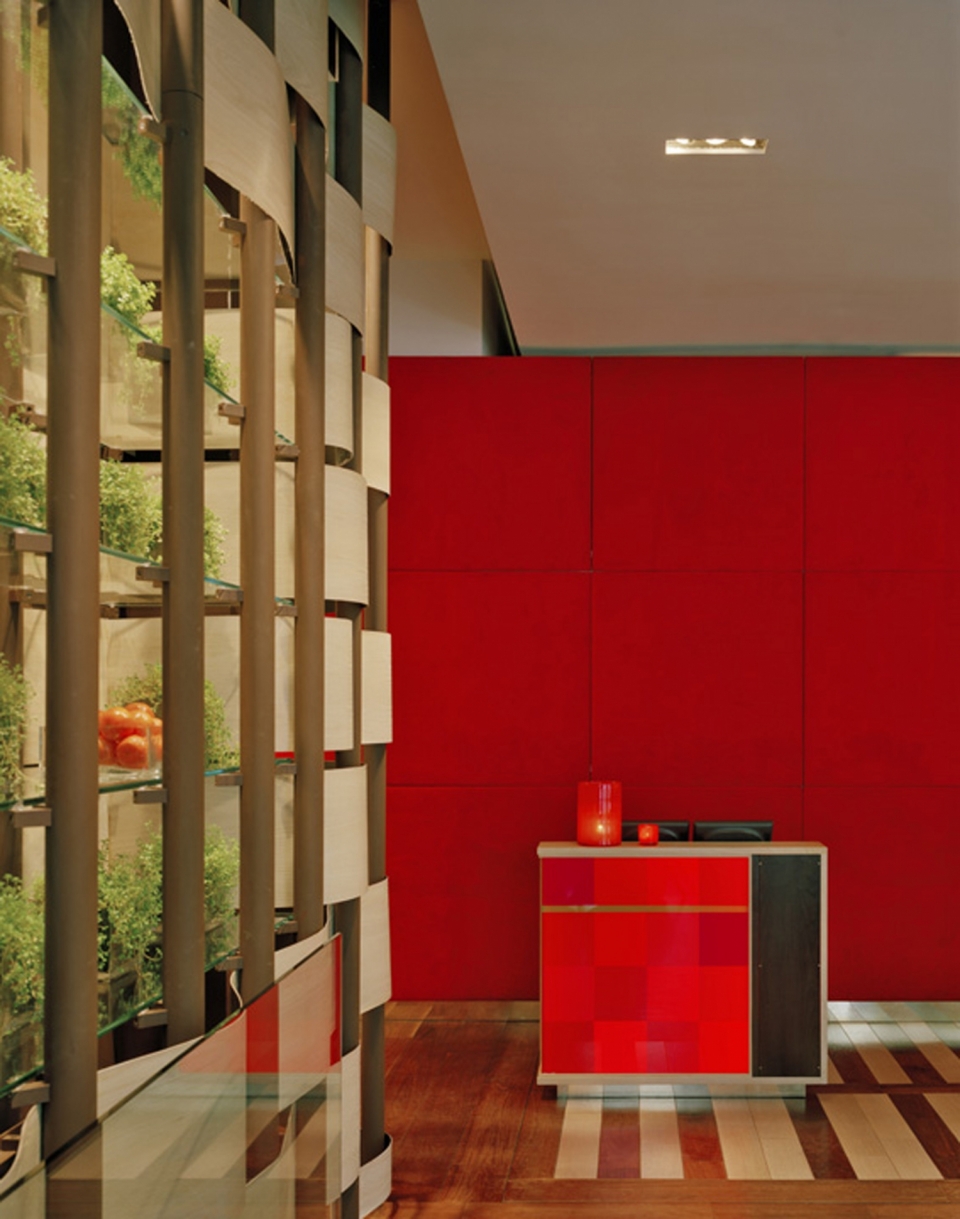 ROUGE TOMATE, NEW YORK, NY - The Rouge Tomate on 10 East 60th Street in midtown Manhattan exemplifies a unique harmony between its design and its food concept.  The design is inspired by the original Rouge Tomate restaurant in Brussels as well as their nutritional charter, S.P.E. (Sanitas Per Escam).  S.P.E. is based on a genuine respect for ingredients and the crafting of nutritionally-balanced dishes; similarly, Rouge Tomate is committed to social and environmental consciousness, a warm atmosphere, and natural materials.

Each design element seeks to reinforce the idea of creating a spa for food.  Upon entry, a two-story ‘Tomato’ Tower greets the guest with a living logo rather than a standard sign.  The logo of 16 squares in varying shades of red is abstractly represented through the display of different fruits, vegetables, and herbs.  The walnut-clad, vibrant red juice bar is the heart of the restaurant at the upper lounge level.  The juice bar is abstractly conceived as a tomato falling into water—an image of purity and freshness—with the rippling wood floor pattern representing the waves emanating from within.  These wood planks stack upon each other and wrap around a sweeping curved bar that contains the juice bar.  The pattern continues behind the bar and climbs the back wall of a wine rack which hides the service and food preparation area.  A grand wall of back-lit white oak wood slats serves as a backdrop for the casual visitor in the lounge.  A partially recessed walnut shelf with sixteen red square compartments allows for a seasonal display of fresh vegetation.

The lower main dining area surrounds the warm, wood-enclosed display kitchen, which showcases the chefs creating all of the nutritionally-balanced dishes.  A wood veneer/resin ceiling and back-lit wood slats around the perimeter give the kitchen a uniquely warm glow.

References to nature mark the two ends of the space.  On the north, an arboreal triptych by Norwegian artist Per Fronth adds the freshness of a forest and simulates the protective shade of a giant tree.  A guest sitting in the front ‘garden’ dining area conjures the image of sitting under a tree on a warm, sunny day.  A cranberry bog on the south enlivens a potentially inactive space.  With two 16-square steel grids full of cranberries, the pool serves as another display of the Rouge Tomate logo and the freshness it represents.  Two booths of seating cantilever over the pool, giving patrons a private, romantic perch.  A row of booths against the back wall adds an increased level of intimacy.