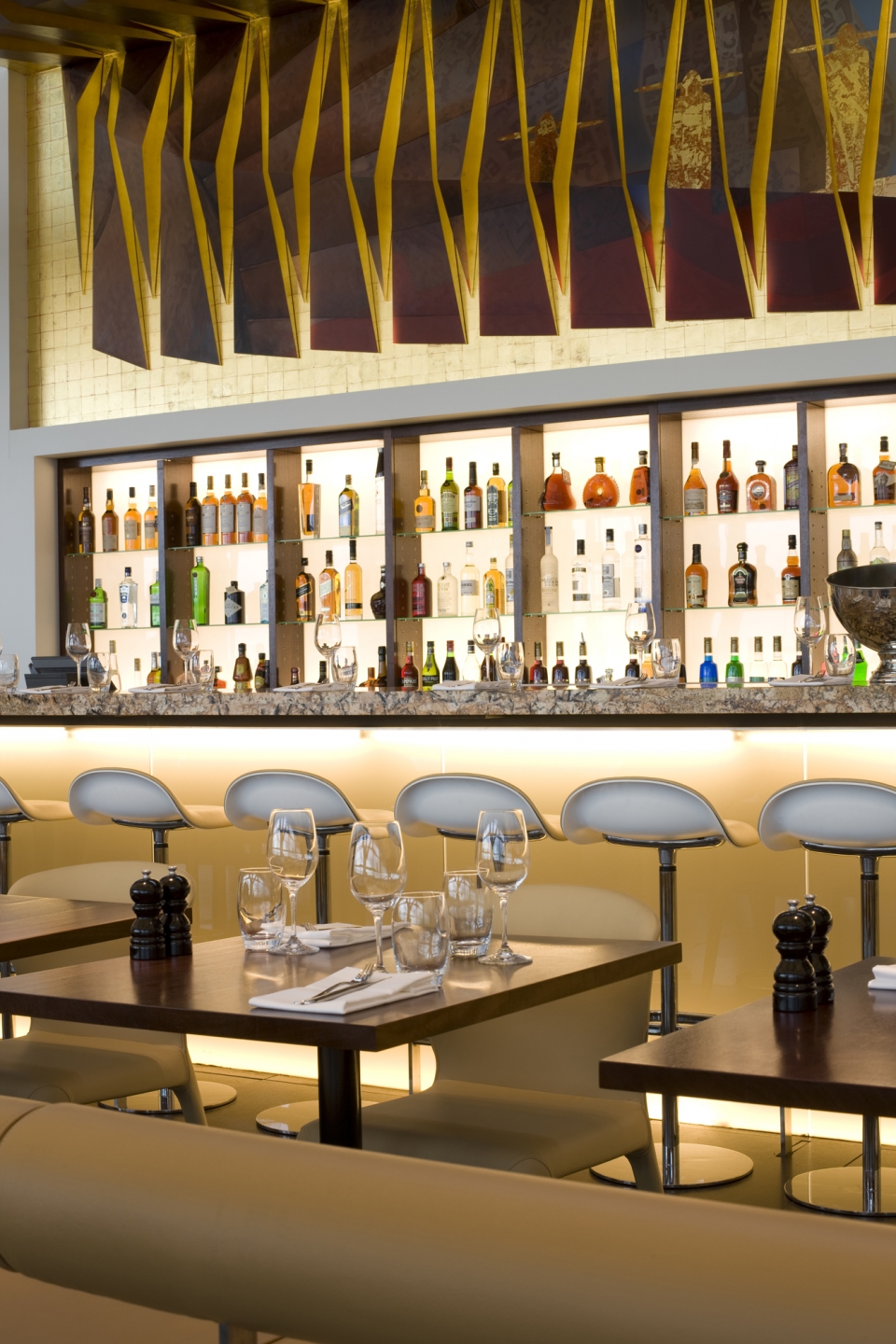 PLANE FOOD BY GORDON RAMSAY, TERMINAL 5 HEATHROW AIRPORT, GB - The new Gordon Ramsay restaurant at Heathrow’s Terminal 5 provides the highest quality cuisine and dining service to an international community of air travelers.  Though the goal is singular, the design tasks it encompasses are numerous.  The restaurant will serve diverse constituencies ranging from dining guests brought together from all corners of the globe to Gordon Ramsay himself whose exclusive vision of excellence in hospitality is world-renown.  The venue is a spectacular but demanding one.  An exciting architectural event, the new terminal is a physical nexus within a global travel network that serves as the way-station for millions of people over the course of a year.  Located within it, the new restaurant must both partake of its environmental energy and create an island of calm that facilitates momentary reflection on the delightful offerings of Plane Food.  The underlying service concept of Plane Food is also an important touchstone for the design.  The Gordon Ramsay team has developed a menu that makes it possible to accommodate any traveler – from one on an international connecting flight with many hours on layover to one with just a few minutes to spare before boarding.  The restaurant must permit service that is efficient but not hurried or breathless.

Two concepts inspired our design.  First, we wanted to present the visual excitement of flying through the esthetic of its machines cloaked in warm and elegant materials. Thus, the diaphanous “wing” canopy that rises above the main dining area is both an icon of flight and a shelter from the cavernous volume of the terminal roof.  The sinuous forms that appear in the plan of the bar and seating areas recall the aerodynamic shapes we associate with streamlining.  Yet, they are sheathed in wood, patinated metal and patterned stone.  Second, we wanted to capture the spectacle of contemporary global air travel viewed from a position of gracious repose.   The “crowd” of travelers – which for the individual is both a source of wonder as well as a fearful sight – is a poignant hallmark of the contemporary experience of travel.  In response to the “crowd” – and in defense against its negative associations - we have designed the restaurant seating to emphasize “community” through its accommodation of many diners in an arrangement that stresses smaller groupings of tables.  Although all of the diners will be able to see one another at any moment, in none of the seating areas are there more than three tables across.  This arrangement corresponds to our belief that individuals find well-being in situations that allow them to distinguish between their physical proximity to the middle or edge of a group.