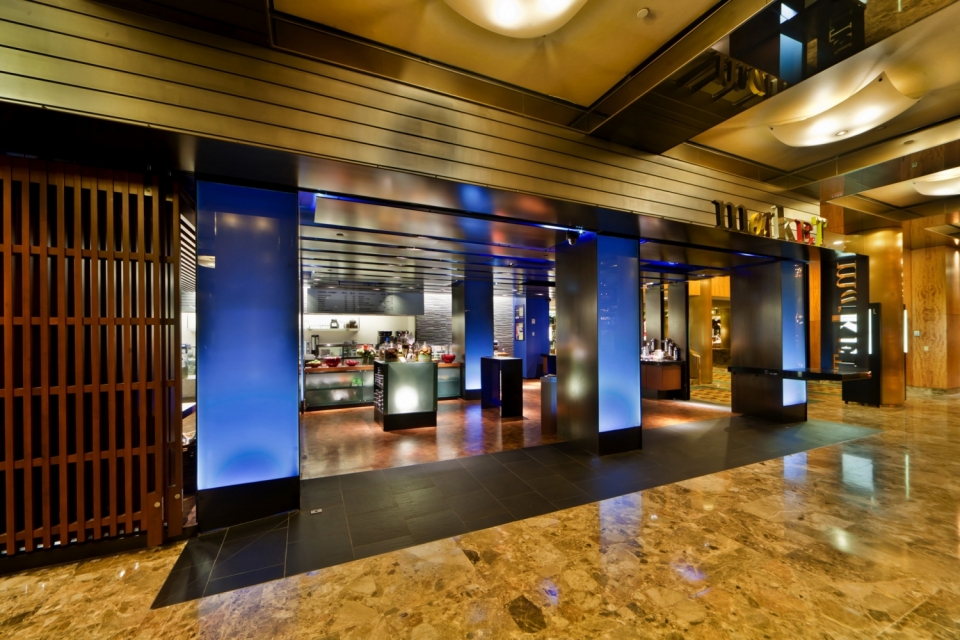 MARKET AT GRAND HYATT NEW YORK, NEW YORK, NY- We designed Market as an homage to the City and the urban infrastructure which gives it life.  The adjacent Grand Central Terminal was a touchstone, not in its stone clad classical architecture but rather in the utilitarian structures below which are as much romantic evocations of the systems of movement in the city as they are structurally essential.  The material palette is industrial – blackened steel, end grain wood block, concrete and tile – lightened by crisp blue light which filters through vertical and horizontal panels like the sunlight at the proverbial “end of the tunnel.” The layout is expedient – here it is possible for patrons to get a full dinner menu as take away including wine, soup and choices of entrees.  This amenity to the hotel reflects the reality of New York food culture in the 21st century which is so engrossing and highly evolved that it would be hard to imagine a stand-alone full service dining venue being a successful competitor to the allure of restaurants outside the walls of the hotel.  Not willing to abandon guests to the hospitality of others, the hotel determined to create a venue for high quality food delivered fast and hot (or cold) for breakfast, lunch or dinner.  In this way, Market speaks to the City and the Hotel in two ways. In its material palette, lighting and simple esthetic it is honest like the railroad trestles above which it sits.  In its programmatic arrangement and operation, it is a testament to speed and flurry which is the New York way.