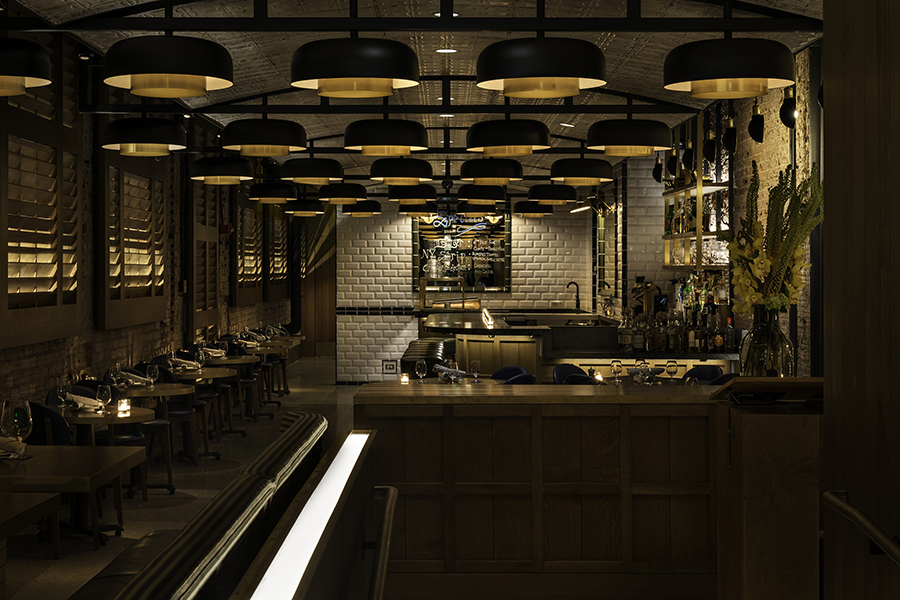 Les Sablons is a new metropolitan restaurant that hugs the edge of Harvard Square in the iconic Conductors' Building in Cambridge Massachusetts. The restaurant spans across three floors - a cellar kitchen, a street level bar and lounge that seats 50, and a second floor dining room that seats 100, including a 14 seat bar.

When it was built in 1912, the 130 foot long by 17 foot wide building served as administrative headquarters for the Boston Elevated Railway. While the second floor originally housed offices for the railway officers, the first floor and cellar contained recreational spaces for the off-duty conductors such as a bowling alley, checker tables, and a gym. As such, the Conductors' Building has always been a place to gather and socialize, although in its first incarnation those activities supported the cause of making sure the trains ran on time.

By the time the restaurateur saw the Conductors' Building, it was undergoing a painstaking exterior renovation after decades of neglect to honor its listing on the National Register of Historic Places. The interior, however, was left in shambles, except for a complete systems upgrade that filled the rundown spaces with an unfortunate tangle of new pipes, ducts, and conduit. The building's condition, small scale, and narrow dimensions, along with its history, conjured in the restaurateur's mind an abandoned subway station. Coupled with his keen interest in french culinary technique (which he wanted the menu to celebrate), his mind wandered to his half-forgotten memories of decrepit Paris Metro stations. His hazy thoughts landed on a photograph of a cracked and sooty sign on the wall of Les Sablons, a station on the Paris Metro Line 1. At that moment in his intriguing but blurry thinking, he introduced us to the building for the first time.

The restaurateur's foggy recollections of dilapidated Metro stations motivated us to investigate the history of the original Paris Metro stations, if for no other reason than to understand what fascinated him about them. We discovered that after World War II, carrossage (arched or cambered brass ribs and steel panels) that followed the barrel-shape of the Metro station tunnels was applied over the original subway walls, hiding the aging classic tilework - and all the posters, timetables, and graffiti that covered the original walls.

Through our research, we recalled our experience during the period between 2006 and 2009 when the Paris Metro authority began a decarrossage process to remove the steel panels in stations like Les Sablons. While they worked on the decarrossage, they left the brass ribs in place. Framed between the ribs, the original tile and everything else that was stuck to it was visible again. The partial erasure revealed as much as it removed - a strategy that gave rise to our design process.

The history and condition of the Conductors' Building, in combination with our specific memories of witnessing the decarrossage process in the Paris Metro stations, reinforced our belief that our design had to transport the past into the present - nostalgic or scenographic restoration of the ramshackle interior would quickly lose its appeal to patrons, and to us. Further, the relationship between old and new had to be symbiotic, not competitive. We needed to take on the spirit of the building gently, and with respect, in order to make the new and old simultaneously legible. As a result, the new architecture and design would never breach or invade that of the original (or what is left of it), but rather share space with it. We believed that this strategy would yield an almost uncanny sensation of being in one building that is occupying another in a mutually advantageous harmony that creates a whole that is greater than the sum of its parts.

The design of the first floor bar, raw bar, and lounge spaces, which includes the greeting area for both floors as well as restrooms, emphasizes the intimacy that the restaurateur desired. These compact elements are gathered beneath a gently arched floating tin ceiling whose shape, length and width are based on the roofs of Boston Electric Railway cars. Rows of blackened steel and brushed brass pendant lights further define the bar, lounge, and greeting areas. Large riftsawn oak shutters limit the visibility of an existing electric bus alley that parallels the length of the building. White tile walls wrap the raw bar to highlight it presence in the room. Wherever possible, the existing brick walls, terrazzo floor, and poured concrete ceilings were left as they were found.

The design of the second floor bar and dining room contrasts the dark intimacy of the first floor by capitalizing on the low-angled, early evening light that streams through the large existing windows that run down one side. As patrons move from the top of the stair at one end of the space through the long narrow room, past the network of yellow velvet banquettes, blue velvet chairs, and honed marble bar, the density of seating increases. Their procession culminates in a white tiled dining room that can be converted to a semi-private room for small functions, presided over by a playful and contemporary wall sculpture. A low acoustically absorptive wood plank ceiling banded in brushed brass floats over the semi-private room and bar area, further augmenting the progressively increasing sense of compression as patrons move through the second floor. A system of suspended steel armatures organizes the cables that electrify the pendant lights that punctuate every table as well as the bar. The steel armatures create a subtle trellis-like effect that further defines each dining area within the overall space. The pendants, which incorporate a glass lens from trolley car headlamps to focus the light down onto the tables, are vertically adjustable. They can be raised or lowered by wrapping or unwrapping the cables around the wall cleats to which they are tethered. Translucent drapery glides across all walls with windows to soften the room visually and acoustically.

We hope that by creating order with the new design elements, and relationships between these and the existing building, we have simultaneously supported a strong sense of both history and the present in the restaurant's patrons.

The gross square footage of the Conductor's Building that houses Les Sablons is : 8,330 SF.