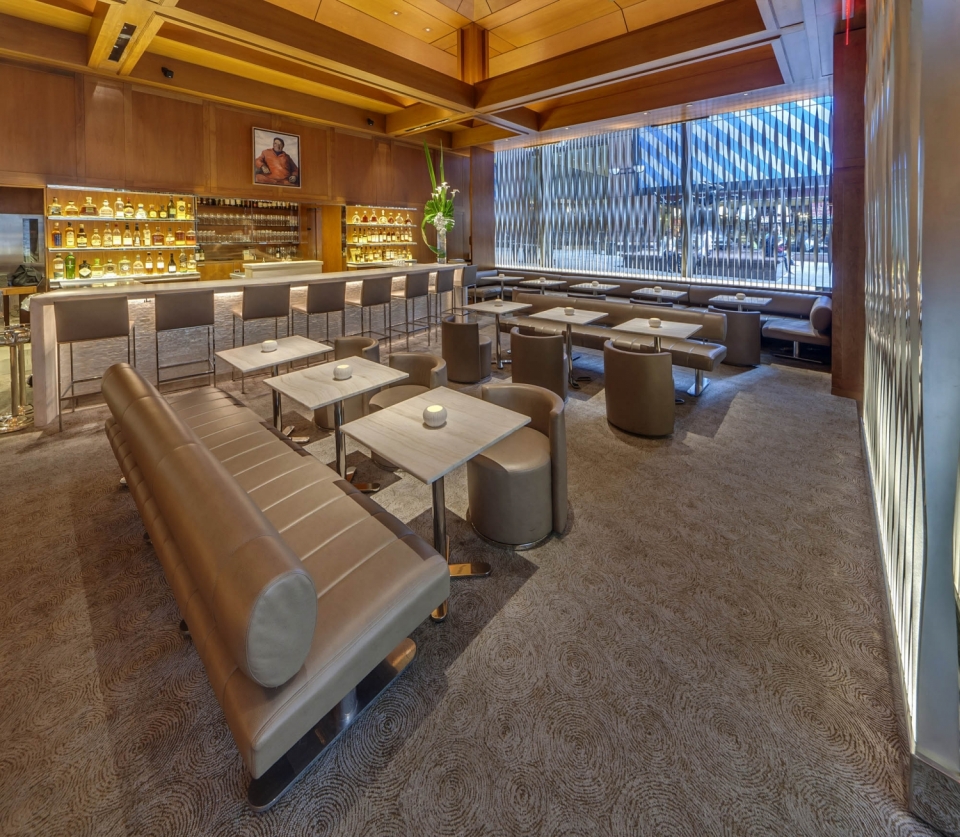 LE BERNARDIN, NEW YORK, NY - The intent of the redesign of the four-star restaurant was to update the entire space, enlarge the lounge and make it a more desirable destination.  The Chef’s words to describe the new vision: convivial, warm, sexy, and serene.

The first decision was to retain the iconic teak ceiling, which received major modifications to correct the lighting with less visible units and adjusted to light each individual table. Everything below the ceiling is new.  We reconfigured the former entry to gain a new eastern window looking into the lounge and a view to a featured art piece.  The lounge has an onyx wrapped bar with mother-of-pearl tile.  The curved bar increases its conviviality and focuses on the Chef preparing food.  The teakwood creates visual contrast with the soft whites in the foreground.  A new seating layout included banquettes as well as single tables, a design direction inspired by the theme of conviviality.  Lighting is structured to create both an important splash of light on each table as well as a dramatic uplighting of surfaces around the perimeter of the room.  We consciously sought the effect of a glowing room in which patrons were supported by an atmosphere of ambient  light offset by the carefully orchestrated and concentrated focal points to create visual coherence.

The color tones of the space are drawn from nature and are associated with the delicate seafood served - tones of sand, water and driftwood.  The metal, fabric and climbing vine sheers at the windows pick up light from the base of the wall.  A little shimmer, like water, is added with the vertical metal twisted screens. The teak block screens create a feeling of both privacy and warmth. All seating, carpet, and millwork were custom designed.