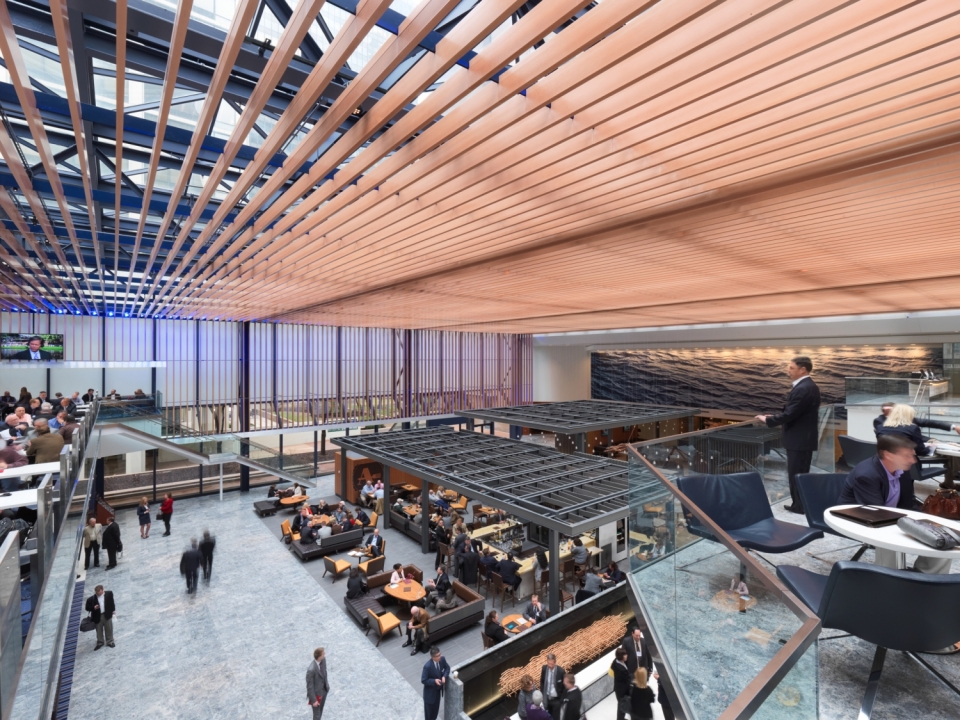 LOBBY AT HYATT REGENCY CHICAGO, CHICAGO, IL - Located next to the intersection of Wacker Drive and Michigan Avenue - the crossroads of Chicago - and on the southern shore of the Chicago River, Hyatt Regency Chicago is both an urban landmark and a flag bearer of an international hotel brand.  Not only is the hotel the site of countless important local and national conventions and events, but its amenities such as the Big Bar, Stetson’s Restaurant and the iconic glass enclosed atrium are recognized city institutions.

First, the Chicago River, whose outlet onto the Lake Michigan made this location ideal for the “City of the Big Shoulders,” is symbolically represented in a new water feature resembling the flow of a prairie stream as it falls over flatland topography.  Art work resembling a river flotilla will adorn this piece.  The water element both organizes the initial guest experience by giving clear direction about where to go  and provides the new lobby restaurant with its own internal “riverfront.”  Interior pergolas will bring down the scale of the restaurant, creating intimate dining areas and a new lobby bar on the main level of the atrium. Above the lobby restaurant, a new art piece will cover the entire southern wall of the lobby – over seventy feet in length – whose subject is the River.  The theme of the river is carried forward in the design of elements such as the new registration desks which have the tear drop shape of canoes or driftwood.  A white and blue palette of stone recalls surface of a roiling stream with both calm and frothy water.  This palette will also contribute to the way finding within the lobby by accentuating the central path to registration area and other amenities and circulation parts such as the elevator lobbies.

the renovation of the lobby including color changing LED lighting, light controlling louvers, new finishes on all surfaces and an art program which, as noted above, recalls the themes of River, Market Place and City Skyline;
- all new Registration and Concierge Areas with windows to the exterior and guest-friendly desks making the exchange with the hotel staff more personal and intimate;
- a new 24 hour Market;
- new lobby seating area; new three –meal lobby restaurant with its own private dining areas and buffet;
- completely renovated Stetson’s Restaurant with open kitchen, Sushi Bar and fireplace;
- a re-invented Big Bar – still located at its iconic perch above the River but now greatly enlarged to facilitate views to the exterior, more digital content, new lighting and sound systems, a dramatic reinvention of its well-known - - --- bottle display in the form of a monumental, internally illuminated liquor tower and new food preparation areas to enhance its menu;
- all new elevator lobbies which carry the material elements of the new design to the East and West tower areas;
- renovated and repurposed Skybridge including new “digital community tables” which will increase the area available to guests for their use of their digital devices.
- New signage and digital information kiosks will be located throughout.