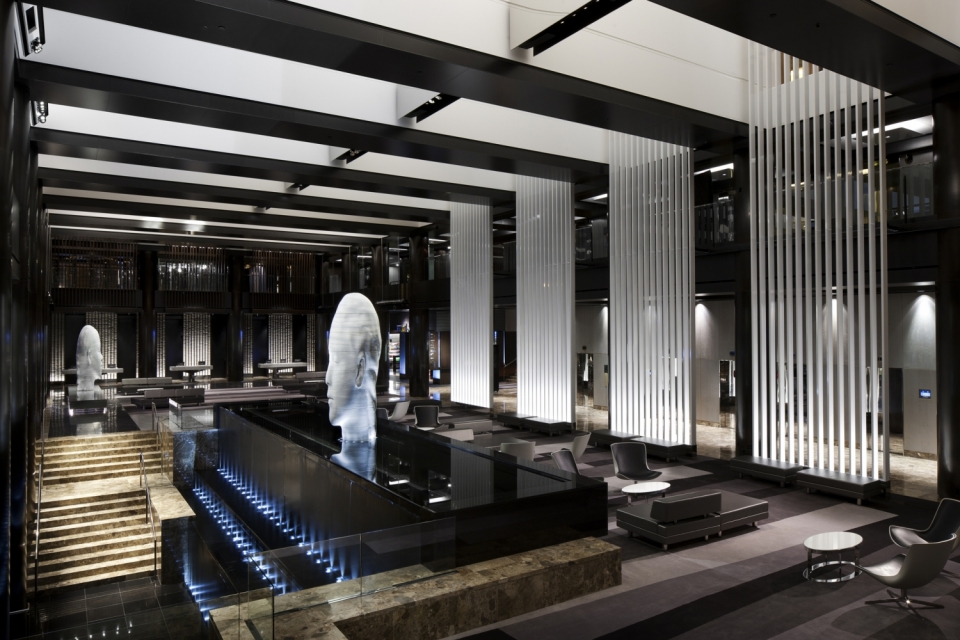 GRAND HYATT, NEW YORK NY - New public spaces for an existing 1300-room urban hotel consisting of a three level lobby accented by sculpture and a water wall, new registration and concierge areas, a twenty-four hour Market, a three-meal restaurant and a meeting room suite were constructed in phases over a period of two years to permit continuous occupancy. More than an interior space, we conceived this programmatic group as a great public urban space

The central lobby anchors the multiple venues and points of entry from the exterior by providing a consistent material palette and lighting.  A glass painting of an ocean horizon by Per Fronth cascades down from the mezzanine at the point of entry.  A sculpture group created by the Spanish artist, Jaume Plensa, presents the theme of cultural diversity which unfolds through the experience of two adjacent monumental heads.  Softly lit screens, monumental columns and dark woods create the backdrop for brightly lit registration, concierge and self-check in desks.  Uplighting of the ceiling subtly changes color over the course of 24 hours following the phases of daylight from sunrise to sunset, running from cool to warm tones.  Uplifting, congenial, calming and contemplative are words that might characterize the design.

The twenty-four hour Market opens to the lobby through a proscenium-like brow formed in blackened steel.  The Market’s internally illuminated columns and fresh white wall tile, polished concrete service counters and end-grain wood block floor together with the focused lighting on the food offerings in glass cases – the “art-work” presented in this area - appear as though one is peering through a window, drawing patrons from across the lobby.

The new restaurant occupies an existing space projecting from the hotel’s exterior and cantilevers over the sidewalk. This glass roofed box forms a long, narrow space which cascades down into the lobby on three levels.  A horizontal louver shades the sun without restricting the view to the exterior from the lobby.  Patrons climb up to the space on a blue granite staircase and glass elevator entering either at the wine library backed by a 30’ glass art panel containing the wine storage or the main level adjacent to a glowing bar which silhouettes guests when viewed up from the street outside. A ceiling sculpture, resembling a surging flock of birds, contains the lighting for the space and visually binds the horizontal array of bar, wine library, casual dining and formal dining.

The new meeting room suite consists of an ante-room with casual seating and service counter, two wood and glass “pavilions” and a central “studio” area which can be used independently or with either or both of the adjacent pavilions. Movable walls allow the various rooms to be open and rendered spatially continuous.  As with each of the other spaces in the new lobby, the meeting room suite has a major art piece commissioned from Burghard Mueller Dannhausen which dramatizes the architectural setting.  Placed on the walls through which one enters, these pieces become visible to the guests only after arriving and present a “walking horizon” which forms a counterpoint to the calmness of the rooms.