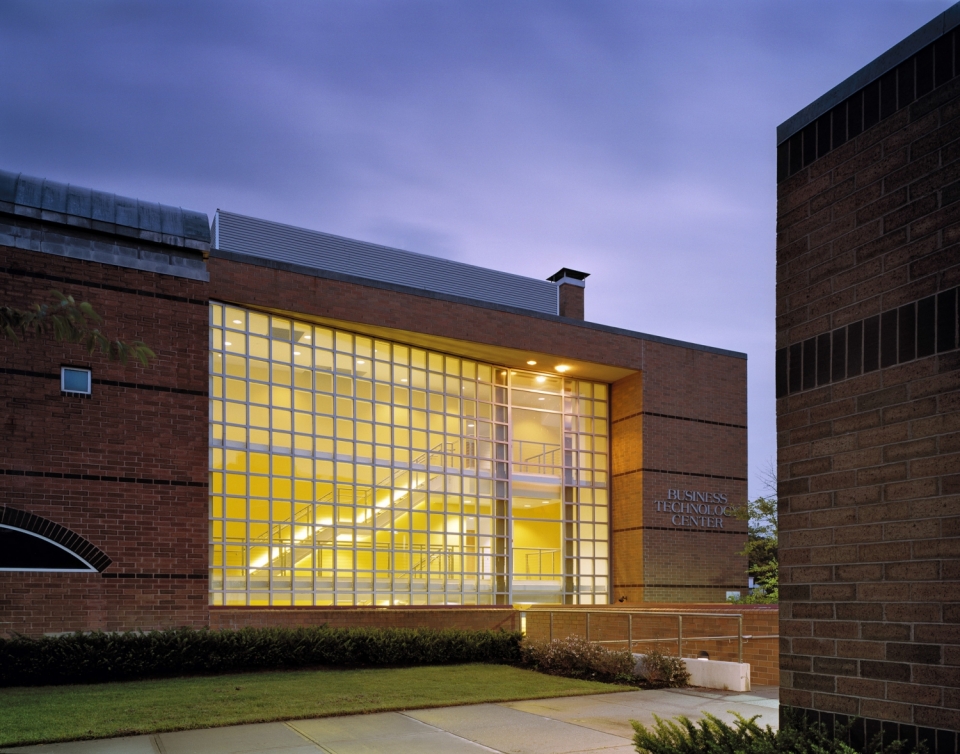 BUSINESS TECHNOLOGY CENTER, SAINT JOSEPH’S COLLEGE, PATCHOGUE NY - The new Business Technology Center stands at the western border of a suburban campus on the flat land of southern Long Island.  The building, an addition to the school’s main library, serves as the center of operations for the fast-growing Business Technology Department, which desperately needed classrooms, technology laboratories, faculty offices and meeting rooms.  While we designed the building to act as the western ‘face’ of the current campus, we also designed it in anticipation of a planned expansion of the campus to the west.  By 2012, the BT Center will form the eastern side of a new technology quadrangle that will effectively re-position the building from the edge of campus to its center.  A vertical slot cut into the metal and glass curtain wall on the west elevation which now expresses the three story height of the building will become the new entrance or gateway to the Center once the campus expansion takes place. The current and especially the future prominence of the BT Center on the campus suggested the use of brick as a primary material for the exterior.  The simple rectilinear shape of the building, rendered in brick to suggest the enduring traditions of higher learning, is offset by the gently curved shape of the metal and glass curtain walls sliding through and revealed by the ‘frame’ of the design.  The color and size of the brick reinforces the relationship between old and new – the first College building was built of the same brick.  The horizontal stripes of dark brown brick relate the building not only to the Library to which it is attached but more importantly to the flat landscape of the campus.