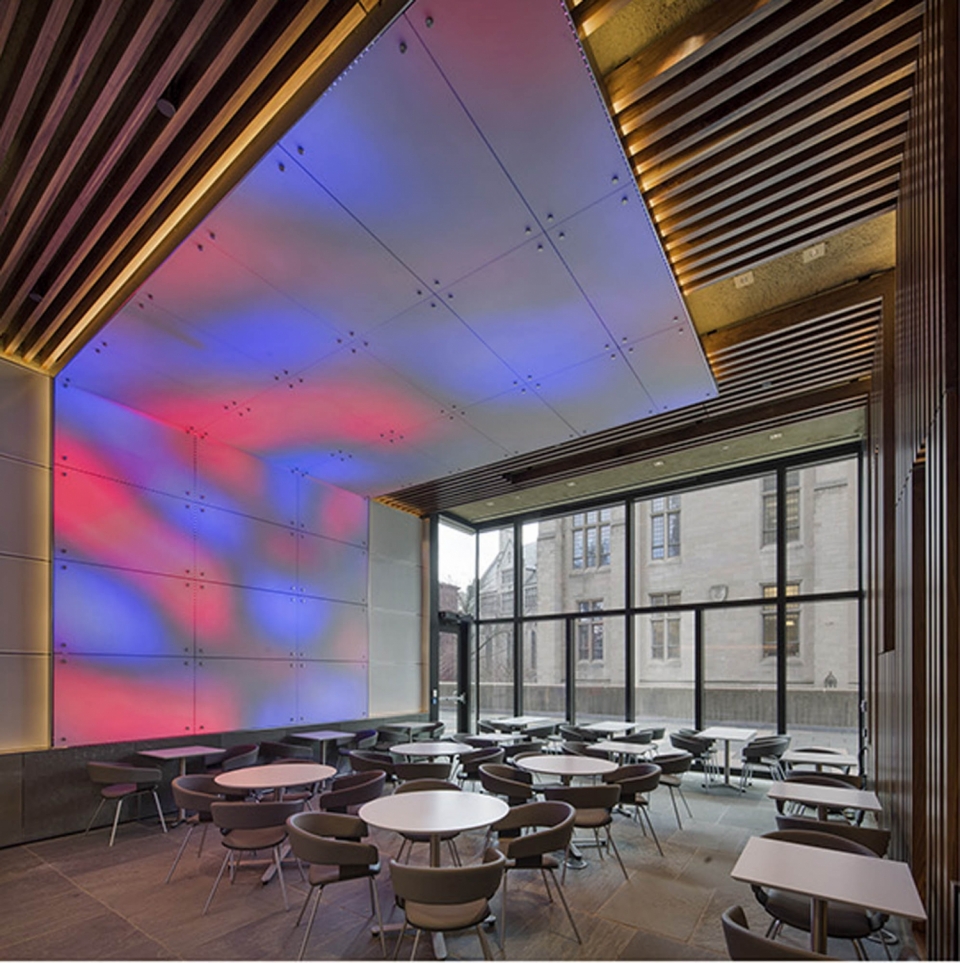 GROUND YALE UNIVERSITY CAFE, NEW HAVEN, CT - The new 'Ground' cafe, in the Marcel Breuer-designed Becton Center at Yale University's School of Engineering and Applied Sciences ('SEAS'), serves not only to create social cohesion among faculty and students of the engineering school, but also to encourage interaction between and among members of other departments in the University.

In our design, we engaged the unadorned poured-concrete volume of a former seminar room by layering a palette of walnut planks, perforated aluminum, and cleft bluestone over the walls, floor, and ceiling of the space.  The original concrete surfaces are intentionally visible through, and are highlighted by, the veils of our material intervention out of respect for Breuer's unique exploration in his design of the textural possibilities of a single material.

More broadly, we recognized that Ground could provide a locus for engineers, scientists, artists, and humanists from the Yale community to connect with each other in part because of its location midway between Yale's liberal arts-oriented central campus and its science-oriented 'Science Hill' campus further north on Prospect Street.  We did not intend that the camaraderie of the varied audiences would stop at sharing coffee, pastries, and a conversation, as our design supports creative collaborations between different constituencies by virtue of a state-of-the-art LED 'digital canvas', nicknamed LuxED, which any member of the Yale community can employ for their scientific or creative work. We proposed that Yale incorporate the 23,000 diode screen as a feature that would attract more than Yale's engineering community while also manifesting itself as a physical embodiment of the connection between science and art. We wrapped the LuxED across a wall and ceiling of the cafe so that it would be visible to passersby on the notoriously grim stretch of Prospect Street where the Becton building is located, using the LuxED's radiance to highlight the Engineering school as a new cultural center on Yale's campus.